Freedom by Sebastian Junger ** (of 4) and last post here 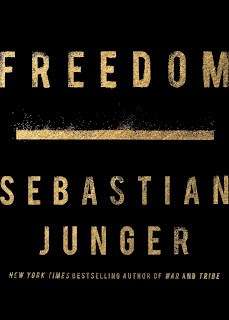 This is my last post at this website. To continue to receive very occasional posts about books and breads, please sign up at ericpallant.com on the blogs page.  Junger takes a walk along the railroad tracks from somewhere in eastern Pennsylvania to somewhere in the western part of the state, near Ohio. It is illegal to hike, camp, or otherwise mess with American railroads so Junger treats the adventure a lot like a war story, for which he is already famous from previous writings. Townies in rural PA are mostly threatening, gun toting, and unpredictable. Railroad cops could be looking out from anywhere. So long as he remains unseen, however, his friends, his loyal dog, and he are free in a very Thoreau-vian sense . Four men with nothing more than what they can carry evade a lot of people, cook over secretive open fires, drink from passing streams, hide at night in the brush, and cope with offensive rains. Between wonderfully evocative pastoral descriptions of forests and looming r
Post a Comment
Read more 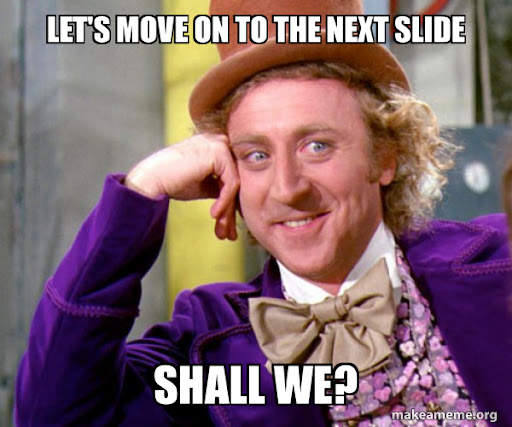 I am consolidating my Blog and a new Website If you want to continue to receive occasional email posts of book and bread reviews, you'll have to travel to  https://www.ericpallant.com/blog . On the right side panel, you'll need to fill in your name and email. It's a two-step process. You'll receive an automated email asking if you're serious about this and have to reply YES before you start receiving new notifications of posts. Of course, if you already receive too many emails, buzz over to the new website , take a quick look, and then don't sign up. BONUS . On the blog, you'll see a review for one of my favorite books of the year, Deacon King Kong by James McBride.
Post a Comment
Read more 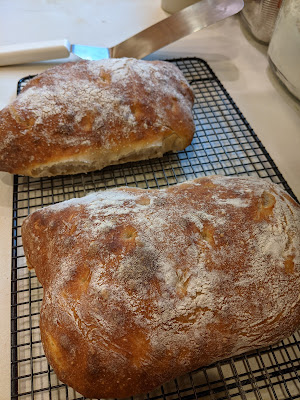 It is such a simple looking bread: ciabatta, the Italian word for slipper. Maurizio Leo's recipe in The Perfect Loaf  contains ciabatta's signature addition of olive oil in the dough, but it is also made with freshly milled Khorasan, aka Kamut, flour. Khorasan is a region of Iran; the flour is is golden in color. The bread when it emerges from the oven has a thin, crackly crust and an open crumb. As toast for the next couple of days (Maurizio's recipe turns out four loaves) the rewarming intensifies its slightly nutty flavor, its external crunchiness, and internal chewiness. My son Isaac is the King of Sandwich. He thought to slice the ciabatta along its equator, fill it with spicy barbecued, pulled chicken, and top it with homemade cole slaw (Isaac is also a Slaw Master.)
Post a Comment
Read more

Reconstruction by Eric Foner ***(of 4) 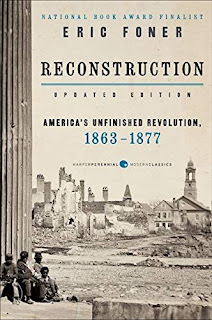 As part of my ongoing attempt to learn the American history I should have been taught I continue to read histories of Blacks, Indians, women, workers, and immigrants. Among the eras I have heard about, but knew comparatively little is Reconstruction, the period immediately following the end of the Civil War. The simple description is the North won the war. Foner's encyclopedic description of the decades that followed strongly suggest that though the America was reassembled, it was not reunified, and that the battle over emancipation and the rights of Blacks to vote freely and fully participate in the economy of the nation has still not been won. In many ways, the South lost the Civil War, but won its battle for White Supremacy. Witness the 2021 southern legislatures forbidding the teaching of Black History in schools (derogatorily called Critical Race Theory when in reality it should be called American History) and ongoing attempts to limit access for Black voters. I digress, tho
Post a Comment
Read more 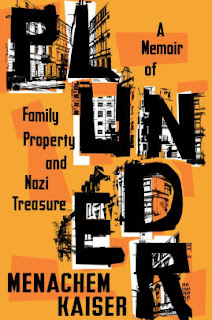 The author's grandfather was the only member of his Polish family to survive the Nazi's death camps. Grandpa died before the author was born, but according to the author's father, after the war ended, the grandfather spent 20 unsuccessful years tilting against Polish and German bureaucracies in an attempt to reclaim his apartment building in Sosniewicz, Poland.  Menachem Kaiser reengages the struggle for restitution in part to see if he can find an attachment to the grandfather he never met. With a jaundiced eye at other so-called Holocaust tourists - Jewish descendants just like himself searching for some abstract kind of connection to lost family or closure - Kaiser learns the building is worth $400 and cannot fathom why his grandfather suffered such anguish to get it back.  What makes the book interesting is Kaiser's musings on the nature of homelands, the meaning of forcible loss of property, and then as he gets closer to potential acquisition of his grandfather&#
Post a Comment
Read more 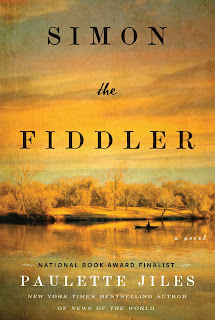 A yarn as wide as the Texas landscape. It is 1864 and Simon the Fiddler makes a living the best he can by playing jigs, reels, waltzes and hornpipes. It's not quite as disreputable a profession as being an actor, but a lot of venues include the kinds of saloons and dance halls that the upper classes tend not to frequent. Until the Union Army conscripts him, that is, and he has to play fiddle and soldier for a year. At the war's so-called conclusion - it doesn't so much end as degenerate into a kind of barely controlled chaos as Union forces occupy the state of Texas and barely maintain order - Simon teams up with three additional veterans and together they escape their army duties to play music, barely make ends meet, and have adventures along the Gulf Coast and the Mexican border. Paulette Jiles evokes of the landscape and era of post Civil War Texas with such acuity you can hear individual birds sing, grasshoppers hum, and feel the heat of an unrelenting sun. The
Post a Comment
Read more 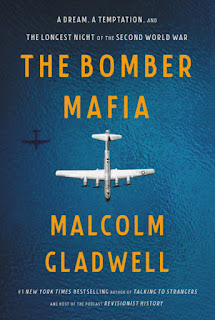 In this tight little book (originally a 6-hour podcast) Gladwell lays out the question of whether warfare is best fought to minimize collateral damage to civilians and fundamental infrastructure, or, on the other hand, ended most expediently by maximizing an opponent's losses with the intention of bringing about a speedy end to the conflict.  In World War I, airplanes were used for the first time, but mostly to fight other airplanes. As WW II approached, an elite group of pilots wondered if the advent of precision bombing could not only alter the outcome of the war, but transform warfare altogether. In theory the Norden bombsight, an analog computer, contained enough calculations and adjustables that a bomber could finally land a bomb on a strategic target like a fuel depot, transport junction, or a factory that made spare parts for the enemy's planes. Precision bombing could, in theory, end the enemy's ability to fight. In practice, however, the bombsight was less than su
Post a Comment
Read more
More posts